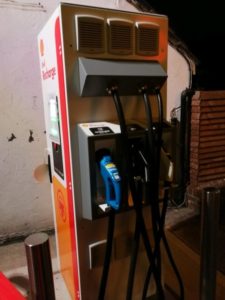 It’s only a matter of time before EV charging stations are integrated with conventional gas stations. It only makes sense for oil companies to start …

It’s only a matter of time before EV charging stations are integrated with conventional gas stations. It only makes sense for oil companies to start adding charging stations to their gas stations, as it will keep them in the loop as electric cars become more and more popular. It will also add more charging options for EV owners. Shell is one of the big oil companies that’s beginning to add some charging units to its gas stations, with one of the first ones being spotted in the England recently.

Shell has recently partnered with Allego to start creating EV charging stations throughout Britain and the Netherlands. Recently, a Tesla Model S owner, Dave Davies, spotted one of these Shell EV units at a ‘petrol’ station outside of London.

The Shell-branded EV charging “pump” seems to have three different charge options, likely to allow for multiple vehicles with different charge requirements. It also looks like a traditional gas pump, which is smart branding on Shell’s part. It’s said that Shell is charging £0.25p/ kWh ($0.34 USD), which seems to be about average for the UK. However, there are rumors of Shell increasing that price to  £0.49p/kWh, which is far too high.

Having a company like Shell start adding EV charging stations to its current gas stations is smart. It will not only keep Shell relevant as oil demands diminish but it will open up new business. There doesn’t seem to be any indication that EV charging will become as fast as a traditional gas fill-up any time soon. Until then, EV owners will have to wait quite a while for their car to charge most of the way. So it makes sense to put places for customers to eat, sit and relax for a bit where charging stations are. So it could open up new ventures for Shell and other oil companies. And considering that Shell already has 25,000 stations worldwide, they’re already located in good areas. We will likely see more stations like this from other oil companies in the near future.

The Top Myths about buying a Service Station in South Africa: Click Here

Want to open your own Service Station in South Africa: Click Here