In partnership with Payless Pharmacy

Engen has launched its first pharmacy service station concept at its Hurlingham branch in Nairobi, Kenya. Selling over-the-counter and prescription medication, the pharmacy has been introduced as another avenue of convenience for Engen customers.

“This is a real value-added service to our valued customers in the Hurlingham area, entrenching Engen as a destination of choice. It aligns perfectly with our aim as a company of strengthening our core business,” says Engen convenience sales and marketing manager, Damon Giraudeaux.

And while Giraudeaux concedes that pharmacies and service stations may not immediately appear to be a perfect fit, “Engen saw the potential in Kenya and this combination has now become a reality. In fact, we’ve already identified four further sites.”

Giraudeaux says that Engen’s customer-first-focus, along with the need to do more with less, while also partnering to achieve better returns, all came together with the pharmacy-service station concept. “The first site was identified based on demographics and location,” explains Giraudeaux, adding that Engen is also investigating other countries where the concept will be viable.

To achieve commercial success in Africa, understanding market needs – and responding to those – is vital. “You can’t come along, as a South African company, and introduce what works in South Africa. It’s imperative that we provide what the specific market requires, while making certain it fits with our corporate identity,” explains Giraudeaux.

Driving down the cost to serve

The concept also aligns with Engen’s efforts to drive down cost to serve, by identifying additional real estate space and determining how it could be best utilized. “With this first pharmacy, for instance, the land has stood empty for years, but now we are able to ensure we get the best return possible on the space.” 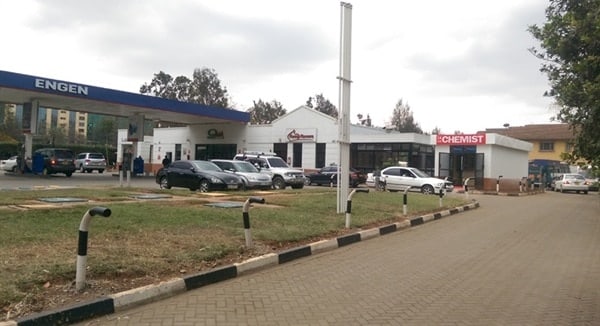 The project was a joint effort between the Engen head office in South Africa and Engen Kenya Ltd, and it took months of negotiations and legislative legwork before being ready to break ground. Negotiations with Payless Pharmacy proved fruitful, and the commercial agreement was signed.

Drikus Kotze, general manager of Engen’s International Business Division says while opportunities to boost customer experience are everywhere, one needs to be quick off the mark to take advantage of these. “It’s vital for Engen that we stay ahead of the curve, but also continue to act according to the specific requirements of the markets in which we do business, for the benefit of all stakeholders,” adds Kotze.

Engen, which is headquartered in Cape Town, South Africa, currently operates in 17 countries in sub-Saharan Africa and the Indian Ocean Islands.